Here is the latest post by Angela and Daz Croucher to their blog A.D. Croucher! They are up-and-coming young adult authors. Check them out!

There are an infinite number of ways to be inspired, but when it comes to putting your story down, you’ll have to choose between two approaches.

The first is the organic approach. That’s where you just write. Ideas, characters and story unfold with each keystroke. If you’ve ever had to improvise an all-new story for an insomniac child, where you surprise yourself with every new plot twist that comes out of your brain without you even knowing it was there… it’s like that. Only, you’re the one asking, what happens next? Continuity, character development, setting and so much more can be added and finessed in the next draft(s). (Spoiler: there will be many drafts). You can think of this as the riffing stage. You’re just picking up your guitar and noodling around, letting licks and riffs and chord progressions fall out any which way while you record it. This is strictly inspiration…

Here is another addition to my series of Yes music posts.  I started this series here and a collection of all my Yes-related posts is here.

I saw the progressive rock band Yes play at Mann Center for the Performing Arts on August 21, 2001 in Philadelphia, Pennsylvania during the Magnification Tour.  I posted a review and photographs from this show here.  You can also read more about this show here.

Every now and again Yes produces and sells a tour book that is sold at the merchandise table at their shows during a given tour.  As it turns out, Yes produced and sold as tour book for their Magnification Tour!  I took photographs of each page of the tour book and posted them below.  Enjoy! 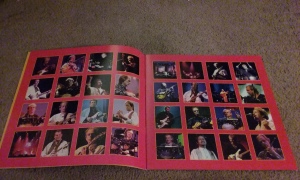 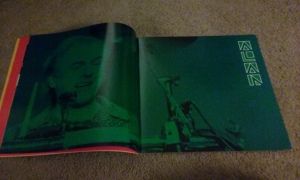 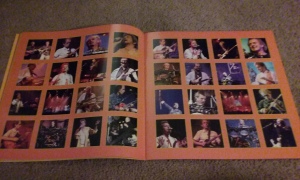 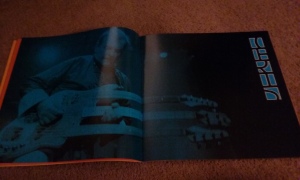 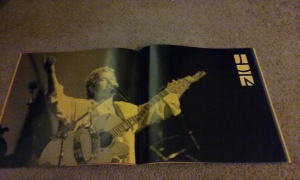 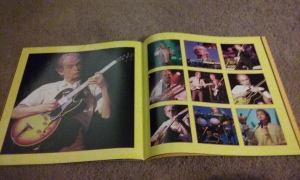 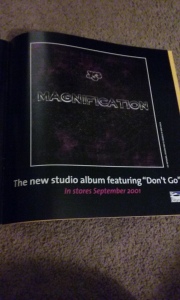 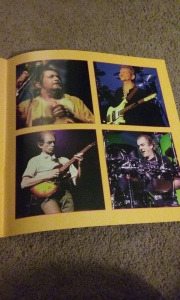 “Yesterday Illinois Governor Bruce Rauner signed HB 165 (full text) amending the Silent Reflection and Student Prayer Act to permit students during non-instructional time before or after school to engage not only in individually initiated prayer, but also “collectively initiated, non-disruptive prayer or religious-based meetings, including without limitation prayer groups, B I B L E (Basic Instruction Before Leaving Earth) clubs, or “meet at the flagpole for prayer” days,” However these may not be ‘sponsored, promoted or endorsed in any  manner by the school or any school employee.”‘

Check out Faye Cohen’s post to her blog Toughlawyerlady!

Pursuing one’s remedies under the civil law process is not for the faint of heart, and many clients do not “stay the course”, which term I am using for pursuing one’s rights even when things become difficult. The way the legal system is portrayed in television series and in movies is not the way the process really works. In many respects the law requires a good understanding of human psychology, as lawyers often engage in mind games and posturing. This is especially true in negotiations and in the litigation process. When one pursues the legal process with the guidance of a lawyer, a partnership is entered into. Some things clients have to keep in mind when pursuing the legal process are listed below:

This article is part of my posts on the economic system of distributism.  This is from practicaldistributism.blogspot.com which you can find here:

“I have presented in several articles that distributism is not just another way of juggling numbers in an attempt to make sense of economics. Just as capitalism and collectivism are fundamentally different ways of envisioning the economic and political environment of a society, distributism is yet another way that is fundamentally different than those views. Some people think that distributism is an attempt at a “middle ground” or blending of capitalism and socialism. In fact, such a blending will result in what Belloc called the Servile State – something entirely different than what distributism hopes to achieve. It can be difficult for distributists to appreciate just how fundamental these differences in economic views are, and that makes it difficult to appreciate just how much of a change we are asking of those we are trying to convince. We face tremendous obstacles in trying to establish even some of what distributism proposes. I would like to present an example of this by considering the concept of price, and the difference between the capitalist “market price” the masses have been taught to accept, and the distributist “just price” we are trying to help them understand.”

This post is in my series regarding the North East Art Rock Festival (NEARFest).  You can find all of my posts regarding NEARFest here and I started the series here.

At each NEARFest, the Festival organizers created a weekend event program.  I was lucky enough to have purchased one from all of the Festivals I attended, and I will post photographs of them all here.  These programs were expertly crafted with many beautiful photographs and well written descriptions and histories and such.  Of course, they also contain their fair share of ads, as one may expect.  I got most (maybe all) of the programs I purchased at NEARFest over the years autographed by the artist who drew its cover and, in this case, that was Yes and Asia cover artist Roger Dean.

I was able to purchase a program at NEARFest 2001 and I thought it would be fun to post it here for prog rock fans who may not have had the opportunity to go to the Festival and/or purchase the program.  Accordingly, I took photographs of each page of the program and posted them below.

I also posted a review of NEARFest 2001 which you can see here.  The review contains many photographs from the event. 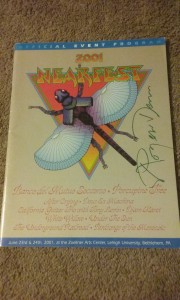 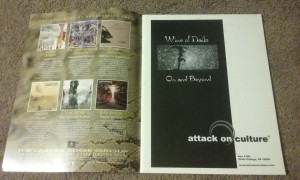 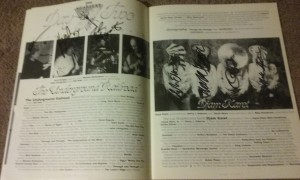 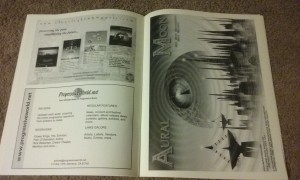 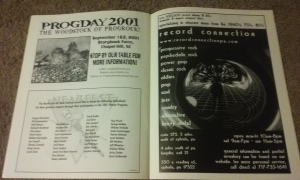 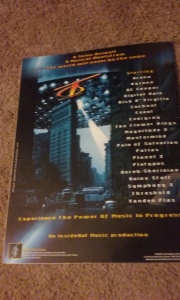 “As previously reported, in April the U.S. Department of Justice won its long-running lawsuit against the state of Florida over its prisons’ kosher meal policy.  Last week in United States of America v. Secretary, Florida Department of Corrections, (SD FL, Aug. 12, 2015), the court settled on the final language for the injunction it issued by separate order.  The parties agreed on the language on accountability and monitoring, but disagreed on the extent the Justice Department would have access to inspect prisons for compliance.  The court largely accepted the Justice Department’s proposed language, and gave the federal government access to personnel, prisoners and food facilities so it can monitor compliance. NorthEscambia.com reports on the court’s order.”

In order to be compensated for the damage to its fire boat, Westfield submitted an insurance claim against the Philadelphia Fire Department’s insurance carrier. In turn, the insurance carrier pursued the City via subrogation for the insurance funds outlaid to Westfield. In response to the subrogation attempt, the City filed for a declaratory judgment in the Philadelphia Court of Common Pleas against Westfield, seeking to absolve it of any liability for the damage to the boat and seeking to enjoin Westfield from seeking property damages from the City on the basis of government immunity. Westfield filed preliminary objections to the City’s efforts in the Philadelphia Court of Common Pleas on the basis that a court in Pennsylvania lacks personal jurisdiction over Westfield, which the Court promptly overruled. Subsequently the City filed a motion for judgment on the pleadings against Westfield which was granted by the Court on the basis that the City was immune from such a subrogation matter. Westfield filed an appeal to the Commonwealth Court of Pennsylvania from the Court of Common Pleas’ overruling of its preliminary objections, and it is that appeal that is the subject of this article.

In considering the appeal, the Commonwealth Court reviewed the criteria for meeting Pennsylvania jurisdictional standards. The first criterion for jurisdiction is for a party (namely Westfield) to have minimum contacts with the forum in which the court where the action was filed is located. The court may exercise jurisdiction over a non-resident, such as a corporate entity like Westfield, if it engages in continuous and systematic business in the forum. In addition, Pennsylvania’s Long Arm statute permits jurisdiction over a non-resident if the non-resident party acts directly, or through an agent, to conduct business in the forum.

Based on the above, the Court reversed the lower court’s overruling of Westfield’s preliminary objections, vacated the Order granting the City’s motion for judgment on the pleadings, and dismissed the City’s matter in its entirety for lack of jurisdiction.

As this matter explicitly highlights, no matter who the parties are or whether the underlying matter is simple or complex, practitioners must be sure not to overlook the most basic of legal issues, like jurisdiction, when bringing a case.

Originally published in Upon Further Review on February 18, 2015 and can be found here.

8th Circuit: Preacher’s Free Speech Rights Not Infringed By State Fair Rules On Where He Can Stand

“In Powell v. Noble, (8th Cir., Aug. 14, 2015), the U.S. 8th Circuit Court of Appeals agreed with the federal district court that a Christian preacher’s free expression rights were not infringed when he was barred from delivering his religious message just outside the paid admission area at the Iowa State Fair. The court said in part:

The fair’s rule prohibiting impeding the flow of people in and out of the fairgrounds addresses the need to limit congestion and disruption and to facilitate safe and efficient access to the fair…. Powell retains alternative channels of communication on the fairgrounds…. While these alternatives may not be Powell’s first choice, “‘[t]he First Amendment does not demand unrestricted access to a nonpublic forum merely because use of that forum may be the most efficient means of delivering the speaker’s message.’” …. We also conclude the district court did not abuse its discretion in holding Powell is unlikely to succeed in showing the rule against bringing signs attached to poles and sticks to the fair is unreasonable….The state has a valid interest in protecting the safety of fairgoers… Neither are we persuaded by Powell’s argument that the rule is arbitrary because the fair allows mounted poles to support tents and flags and small sticks for the fair’s many food-on-a-stick offerings.

The court however remanded the case to the district court for it to consider whether the State Fair’s unwritten rules on access to the fairgrounds are overly vague in violation of the due process clause.  The Des Moines Register reports on the decision.”

This post is part of my series of posts on progressive rock which you can see here.

On September 12, 2014 I saw the progressive rock band King Crimson during their 2014 tour at the Kimmel Center in Philadelphia, Pennsylvania which featured a huge seven piece band with three drummers, two guitarists, a bass player, and a woodwind player.  I reviewed this concert, and that review, along with some pictures of the show, can be seen here.  It was easily one of the greatest concerts I have ever seen.

The Kimmel Center often produces and distributes an event program at its shows, and the September 12, 2014 King Crimson concert was no different.  I have taken photographs of that program and posted them below as fans may enjoy and be interested in what the band authorized for its show. 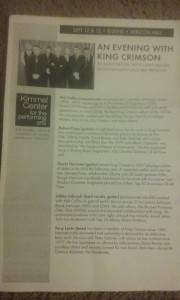